Chart 1: The evolution of European versus global gas price benchmarks 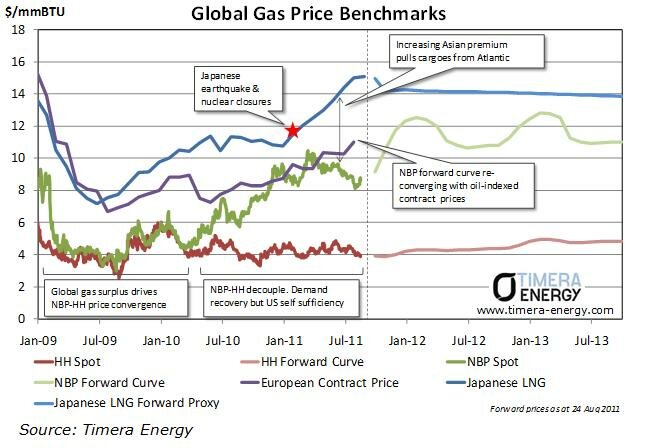 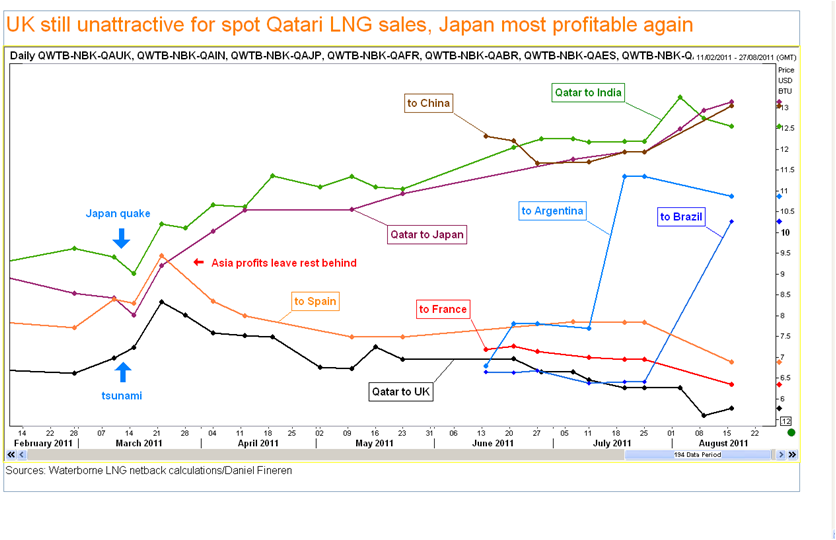 The European gas market has historically had a reputation for a rather pedestrian approach to evolution. But over the last few years growth in LNG flows and arbitrage has connected Europe with the previously independent regional gas markets of North America and Asia. At the same time a divergence between European spot market pricing and oil-indexed contract prices has seen a rapid evolution of spot hub liquidity. These factors have contributed to an accelerated evolution of European gas pricing dynamics and some dramatic swings in market prices.

In order to explore current market dynamics and how these may change, it is useful to look back over the last three years. Chart 1 illustrates the increasing influence of global factors in driving swings in European gas pricing, between what has effectively been a Henry Hub price floor and an oil-indexed contract price ceiling.

Recent history: Slump, divergence and evolution from 2008 to 2010

The divergence of spot gas prices below oil-indexed contract prices between 2008 and 2010 has been one of the defining events in the evolution of wholesale European gas markets since liberalisation. This price divergence has arguably done more than any policy measure to accelerate the development of European spot hub liquidity. The majority of gas that flows into Europe is still purchased via long term oil-indexed contracts (around 70%). But the ability of producers and large wholesalers to dictate terms based on oil-indexed pricing has been eroded by strong commercial incentives to operate at a discount in spot markets.

Three key factors combined over this period to drive European spot prices below the oil-indexed alternative:

There was a rapid contraction of gas demand as a result of the financial crisis that left European wholesalers with a surplus of gas against their ‘take or pay’ contract obligations
The gas import requirements of the US were dramatically reduced as a result of the North American ‘shale gas’ revolution
A large volume of un-contracted LNG export production came online
As a result a global surplus of LNG cargoes drove European spot prices down to converge with US Henry Hub prices during 2009 and the first half of 2010 as shown in Chart 1.

These conditions caused severe financial stress to large European gas wholesalers (e.g. E.ON, GDF), whose cost base was determined by a ‘must take’ volume of significantly more expensive oil-indexed gas, but whose revenue line was increasingly influenced by cheaper spot gas. This stress flowed back up to producers (e.g. Gazprom, Statoil) whose aggressive defence of oil-indexed pricing had to be tempered in response to the damage being done to their key customers. A compromise ensued via a combination of agreements to (i) delay oil-indexed volume delivery and (ii) increase the level of spot indexation in delivered gas.

The strategy of producers in allowing these concessions was to a large extent an exercise in buying time in the hope that spot and oil-indexed prices would once again re-converge. And the relief they were looking for arrived in the second half of 2010. The strength of economic recovery (particularly in Germany) and a rapid rebound in gas demand due to cold weather, saw spot and forward prices move back up towards oil-indexed contract levels.

The defining event of European gas pricing dynamics in 2011 has been the impact of the Japanese earthquake on global LNG demand. The sudden closure of 12GW of nuclear capacity caused a rapid increase in Japanese LNG imports to meet the ramp up in gas-fired generation demand (in the order of 60% of the fuel requirement to fill this gap is likely to be met by LNG imports). This occurred against a backdrop of strengthening LNG demand from developing Asian countries and the threat of delays to new LNG production coming online by the middle of this decade. These events have combined to drive up delivered Asian LNG prices to levels above $15mmBTU, a 50% increase from pre-Earthquake prices and well above European alternatives, causing the diversion of available Atlantic basin cargoes to Asia. Chart 2 illustrates the evolution of LNG netback prices in 2011 for Qatar, the world’s largest exporter.

LNG is only one of many sources of supply to European gas markets. But as Europe becomes increasingly import dependent, the anticipation of a diversion of available LNG to Asia means that oil-indexed gas once again dominates alternative supply. This is reflected in the current NBP forward curve (shown in Chart 1) which is in steep contango and is re-converging with the oil-indexed price level. Under these conditions Europe is exposed, in times of high demand or supply constraints, to compete with Asia for available LNG cargoes to meet any shortfall in pipeline delivered gas. This may cause sharp increases in spot prices above the oil-indexed benchmark over the shorter term.

The way forward: price rises and convergence are not guaranteed

With all the excitement about Asian LNG premiums, forward curve contango and oil-indexed price uplift, it is easy to forget some of the factors working against a structural appreciation of European gas prices. Oil-indexed contract prices present a significant hurdle to rising market prices over the medium term, as purchasers have the flexibility to ramp up contract volumes above minimum take (in the order of 20%) and producers are less concerned about the impact of selling uncontracted volumes into spot markets. That said, the 6 to 9 month lag in the oil-indexed formula means that oil prices rises in the first half of 2011 are yet to fully flow through into contract prices. But despite the dramatic gas price uplift over the past year it is far from a foregone conclusion that hub pricing will return to a steadier state of convergence with oil-indexed prices.

The global LNG market is responding to the Asian price premium illustrated in Chart 2. The re-export of a LNG cargo from Zeebrugge to Asia this month is consistent with increasing efforts to divert European cargoes to Asia. On the other side of the Atlantic basin, the US is developing LNG terminals to export their relatively low priced gas to Asia. And the net back benefits of LNG diversions to Asia are rapidly being eroded by increases in LNG tanker rates, with day rates tripling in the last 18 months to $110,000. In contrast the Fukushima driven shock to Japanese demand is a ‘one-off’ impact that although structural, is likely to diminish as nuclear capacity comes back online.

Some of the factors which have helped soak up surplus gas flowing into European spot markets may also change. The margins of gas-fired power generators are being squeezed by appreciating gas prices, curtailing power sector gas demand. In addition the negotiated delays in long term contract take or pay delivery volumes will start to flow back into the market from 2012. The weather is also a factor with no guarantee of a repeat of the unusually cold winters of the last two years.

However the largest threat to European gas prices comes from recent evidence of a rapid slowdown in global economic growth. The impact of a recession on gas demand is fresh in everyone’s memory from 2008-09. Of particular relevance would be a contraction in the export driven growth of German industry and a slowdown in the growth of developing economies in Asia whose hunger for imported gas is a strong driver of Asian LNG price premiums. These factors are yet to transpire but their potential impact is worthy of consideration against the current backdrop of some rather enthusiastic European gas market bullishness. 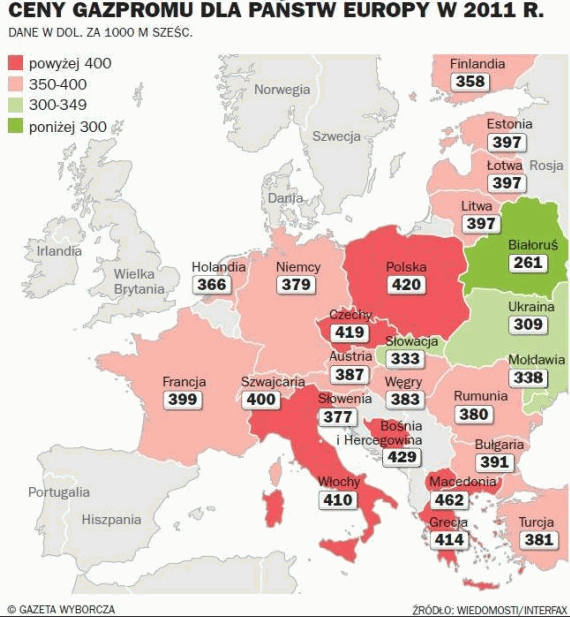