Earlier I posted some questions for next year: Ten Economic Questions for 2019. I'm adding some thoughts, and maybe some predictions for each question.

The most followed wage indicator is the  “Average Hourly Earnings” from the Current Employment Statistics (CES) (aka "Establishment") monthly employment report. 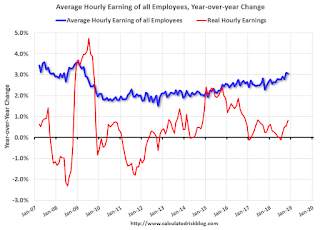 The blue line shows the nominal year-over-year change in "Average Hourly Earnings" for all private employees.  Nominal wage growth had been running close to 2% since 2010, and picked up a little in 2015, and more in 2016.

The red line is real wage growth (adjusted using headline CPI).  Real wages increased during the crisis because CPI declined sharply.   CPI was very low in 2015 - due to the decline in oil prices - so real wage growth picked up in 2015.

There are two quarterly sources for earnings data: 1) “Hourly Compensation,” from the BLS’s Productivity and Costs; and 2) the Employment Cost Index which includes wage/salary and benefit compensation. All three data series are different, and most of the focus recently has been the CES series (used in the graph above). 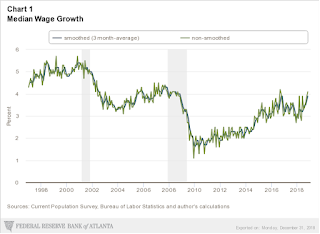 The second graph is from the Atlanta Fed Wage Tracker.   This measure is the year-over-year change in nominal wages for individuals.

By following wage changes for individuals, this removes the demographic composition effects (older workers who are retiring tend to be higher paid, and younger workers just entering the workforce tend to be lower paid).

As the labor market continues to tighten, we should see more wage pressure as companies have to compete for employees. I expect to see some further increases in both the Average hourly earning from the CES, and in the Atlanta Fed Wage Tracker.  Perhaps nominal wages will increase close to 3.5% in 2019 according to the CES.

Here are the Ten Economic Questions for 2019 and a few predictions:

Opinion: The pandemic is no time for fiscal distancing