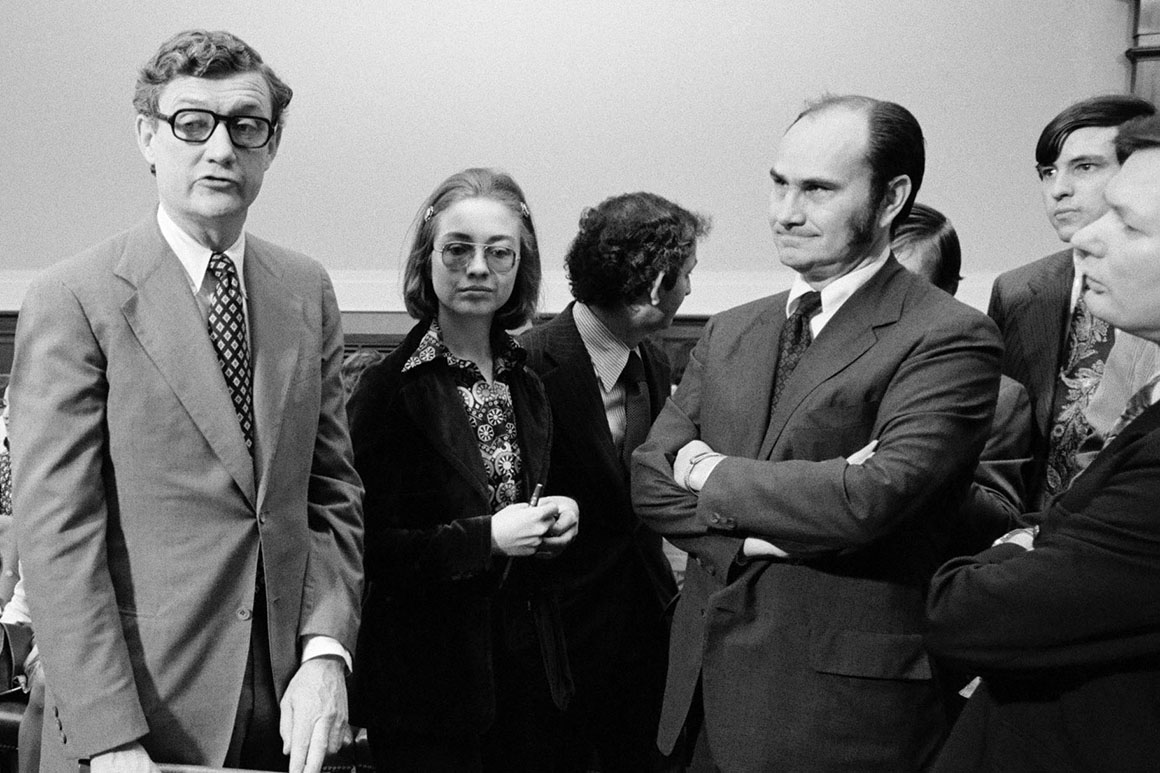 A document Hillary Clinton helped write nearly a half century ago has returned from the dead to threaten the man she couldn’t vanquish in 2016.

The bizarre, only-in-D.C. twist centers on a congressional report penned by a bipartisan team of young attorneys that included Hillary before she was a Clinton and written in the throes of Watergate. Then, unlike now, not a single lawmaker had been alive the last time Congress impeached a president. They had little understanding of how to try and remove Richard Nixon from the White House. So they tapped Clinton and a team of ambitious staffers to dive into the history of impeachment, stretching back to the 14th century in England: How has impeachment been used? What were the justifications? Can we apply it to Nixon?

The resulting document became a centerpiece of the congressional push to drive the Republican president from office. But then Nixon resigned. The memo was buried.

That was just the report’s first life.

In an ironic twist, the document was resurrected in the late 1990s. Republicans gleefully used it to bolster their unsuccessful bid to oust Clinton’s now-husband, President Bill Clinton. Then it faded from public conscience — again.

Until now, that is. The 45-year-old report has become a handbook House Democratic lawmakers and aides say they are using to help determine whether they have the goods to mount a full-scale impeachment effort against President Donald Trump, the same man who three years ago upended Hillary Clinton’s bid for a return trip to the White House.

Essentially, Clinton, albeit indirectly, might get one last shot at accomplishing what she couldn’t in 2016 — defeating Trump.

“I can only say that the impeachment Gods have a great sense of humor,” Alan Baron, an expert on the topic who has staffed four congressional impeachments against federal judges, said of the recurring role Hillary Clinton keeps playing in this story.

The walls were closing in on a beleaguered President Nixon. His aides were going down one by one. He had tried — and failed — to halt the investigations into his behavior by cleaning house during the infamous “Saturday Night Massacre.”

On Capitol Hill, Hillary Rodham, a 26-year-old law school graduate, was hired by the House Judiciary Committee to work on a bipartisan staff effort to help determine whether to impeach Nixon. She joined a team of aspiring lawyers that also included Bill Weld, who would go on to his own illustrious career as a top Justice Department prosecutor, Massachusetts governor and most recently as a long-shot 2020 GOP primary challenger against Trump.

Over a couple of months just before the climactic end of the Watergate scandal, the team dug deep into constitutional and legal arcana scouring documents that dated to the country’s founding, as well as century-old newspaper clippings in the Library of Congress.

The resulting title of the report, “Constitutional Grounds for Presidential Impeachment,” may elicit yawns. But what they produced became a seminal 64-page road map with appendices that looks into what counts as an impeachable offense.

At the time, lawmakers needed the guidance. They had not had to think seriously about these issues for more than 100 years, when Congress rebelled against President Andrew Johnson over his handling of reconstruction after the Civil War.

The staffers’ research broke ground by making an accessible argument that a president doesn’t have to commit a straight-up crime for Congress to consider the historic step of impeachment.

“The framers did not write a fixed standard. Instead they adopted from English history a standard sufficiently general and flexible to meet future circumstances and events, the nature and character of which they could not foresee,” the House staffers, including the future first lady, wrote about the ill-defined constitutional working of “high crimes and misdemeanors.” 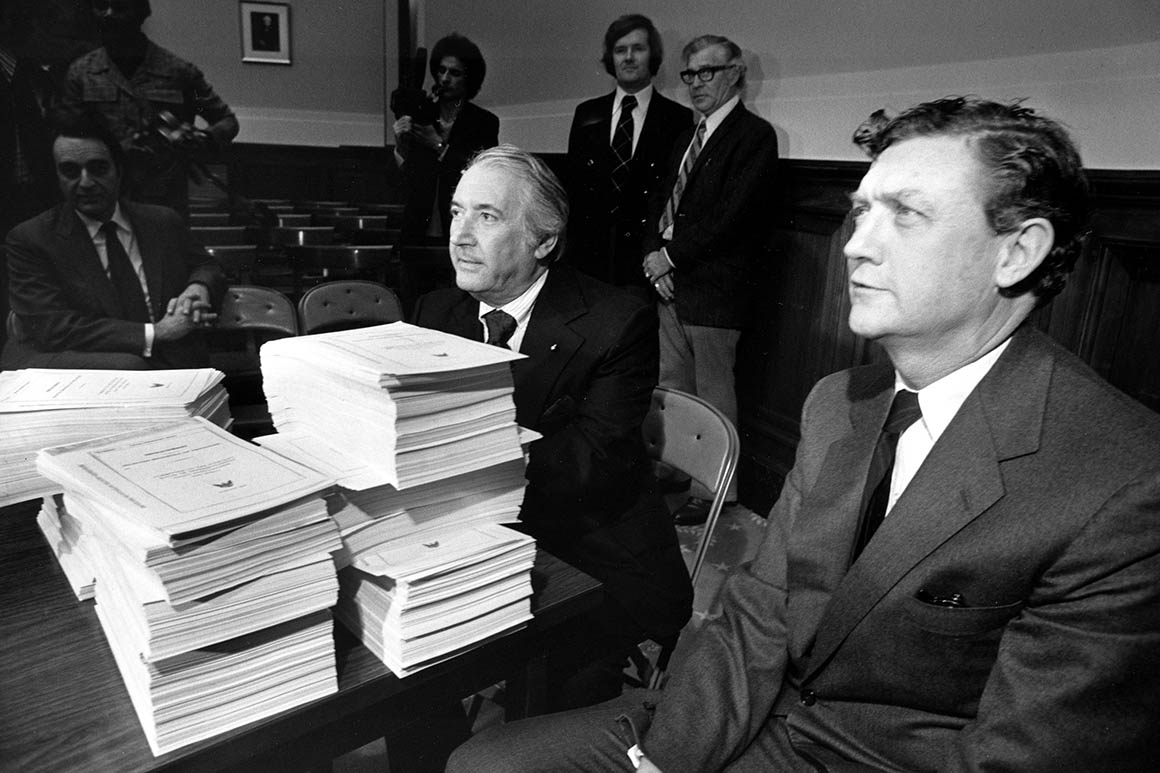 Their exhaustive report also included a whirlwind history lesson about how America’s founders had been well-versed in impeachment when they included the language in several clauses of the Constitution — the British Parliament had used the impeachment process as a check on royalty for more than 400 years, dating to the 14th century.

And the process hadn’t just been used to remove alleged criminals from office. In the United States, 83 articles of impeachment had been voted out of the House up to that point against a dozen federal judges, one senator and Andrew Johnson, and fewer than a third actually involved specific criminal acts. Far more common, they wrote, was that the House was dealing with allegations that someone had violated their duties, oath of office or seriously undermined public confidence in their ability to perform their official functions.

“Because impeachment of a President is a grave step for the nation, it is to be predicated only upon conduct seriously incompatible with either the constitutional form and principles of our government or the proper performance of constitutional duties of the presidential office,” the House staffers concluded.

While the document Hillary Rodham and her colleagues produced got marked as a staff report, the Democrat-led House Judiciary Committee still used it to justify their historic votes against Nixon. In fact, two of the three articles of impeachment adopted by the powerful panel — dealing with the Republican president’s abuse of power and contempt of Congress — didn’t cover areas that fall neatly into the category of federal crimes. A final staff report submitted to the House just days after Nixon made history as the first president to resign from office quoted from the staff’s earlier analysis.

More than two decades later, though, Clinton may have wished she had never helped write the document.

It was 1997, eight months before the Monica Lewinsky scandal broke. President Bill Clinton was facing Republican outrage over everything from allegations of campaign finance irregularities to Whitewater, the probe into the Clinton’s Arkansas real estate investments. To legitimize their anger, some Republicans turned to a document that likely hadn’t been discussed for a generation — the 1974 impeachment report Hillary Clinton had worked on.

Georgia GOP Rep. Bob Barr resurfaced the report in a sarcasm-laced op-ed in the Wall Street Journal that opened with the line “Dear Mrs. Clinton.”

The conservative congressman went on to thank the first lady for giving lawmakers a “road map” to consider her husband’s impeachment with a report that “appears objective, fair, well researched and consistent with other materials reflecting and commenting on impeachment.”

“And it is every bit as relevant today as it was 23 years ago,” he added.

In time, both parties would cite from the Judiciary Committee’s 1974 staff report as they fought over whether the conduct associated with President Clinton’s sexual relationship with Lewinsky merited impeachment.

Calling the Watergate document “historic,” then-Virginia GOP Rep. Bob Goodlatte argued in the fall of 1998 that Clinton’s offenses, like those of Nixon, had extended beyond questions of obstruction of justice to whether the president betrayed the public trust. Then-Rep. Charles Canady, a Florida Republican chairing a House subcommittee on the Constitution, referred repeatedly to the Watergate panel’s work during the House debate and later in Bill Clinton’s Senate trial, which ultimately concluded with his acquittal.

Democrats, meanwhile, had a different read on the group’s findings.

California Rep. Zoe Lofgren, who had worked for a member of the Judiciary Committee during Watergate, shared copies of the more than 20-year-old report with colleagues from both parties and posted a link to it online — she had an offer from law school students to type it out so it could be searchable by word but internal ethics rules prevented that move. Her primary argument was that Clinton’s lies about his relationship with Lewinsky, while immoral, didn’t match the historical precedents outlined as qualifying for impeachment in the 1974 staff analysis.

“The interesting thing is they cited it for purposes it didn’t support. I wonder whether they read it or whether they had index cards prepared by their staff,” Lofgren said in a recent interview when asked about the Republicans who were using the report to justify removing Clinton from office.

Ted Kalo, a former top Democratic aide on the Judiciary panel, said there was widespread bipartisan agreement that the Watergate staff report mattered — even amid the differing interpretations.

“Great books have been written and eloquent testimony was given in the 1998 hearing on the topic, but even in 1998, the 1974 staff report was considered to be state of the art,” he said.

“It’s the most concise, easily understood document on the history of the impeachment clause and the intent of the framers, including the issue of what constitutes an impeachable offense that I’ve come across. And it faithfully and logically describes what was intended to be the appropriate scope of the House’s impeachment power,” he added.

Now it’s 2019. President Donald Trump is an unindicted criminal co-conspirator who has fended off myriad congressional probes and watched his aides go to prison over an investigation into the Trump campaign. Most Democrats — not to mention their fervent progressive base — are clamoring for impeachment. And yet again, the 1974 impeachment report is getting a rereading on Capitol Hill.

Just as the Watergate staff suggested, the current House Democrat-led impeachment inquiry has grown beyond the criminal allegations that special counsel Robert Mueller investigated — conspiracy to defraud the U.S. and obstruction of justice — into to a wider list of grievances, covering everything from campaign finance violations, to self-dealing, abuse of power and undermining the judiciary and media.

Senior members have dusted the document off for their newer colleagues. Lofgren, for one, asked her staff to post a fresh link to the Watergate document back in mid-May 2017, not long after Trump fired FBI Director James Comey and Mueller’s appointment.

“I just thought, as people were throwing suggestions around, it’s a very tightly crafted and I think excellent piece of scholarship and it’d be helpful to have that be available to the public,” Lofgren said.

Others have pointed back to the 1974 document as reason for Democrats to move faster.

Michael Conway, a former Judiciary Committee staffer in 1974 and longtime friend of both Bill and Hillary Clinton, cited the report in an op-ed for NBC published in March that took issue with House Democratic leadership’s reluctance to embrace impeachment proceedings against Trump.

He slammed House Speaker Nancy Pelosi for a “cramped formulation” that impeachment can proceed only if investigative developments emerge that are “overwhelming, compelling and bipartisan.” That didn’t square with what the 1974 researchers showed, he wrote.

“The myths about impeachment they skewered then remain relevant to Democrats considering any exercise of that power today,” Conway said.

Michael Gerhardt, a University of North Carolina law professor who has written books on impeachment and testified before Congress on the topic, said the Watergate committee report “has easily withstood the test of time” into 2019.

“It still is as good as any other document yet prepared on the origins and scope of the federal impeachment process. It is appropriately authoritative. And so it is as relevant to President Trump as it has been to every other president since Nixon,” he said.

While Gerhardt said Republicans who embraced the report during Bill Clinton’s impeachment should for consistency sake be open to what it tells them now in Trump’s case, he said he also recognized there are new political limitations. For starters, Democrats and Republican aides wrote the Watergate report together.

“It seems impossible that a joint staff would be conceivable on a hugely important matter,” he said in an email. “It shows how far we have come (down) since 1974.”