Ghosts of Iraq hang over Trump’s chest-thumping on Iran 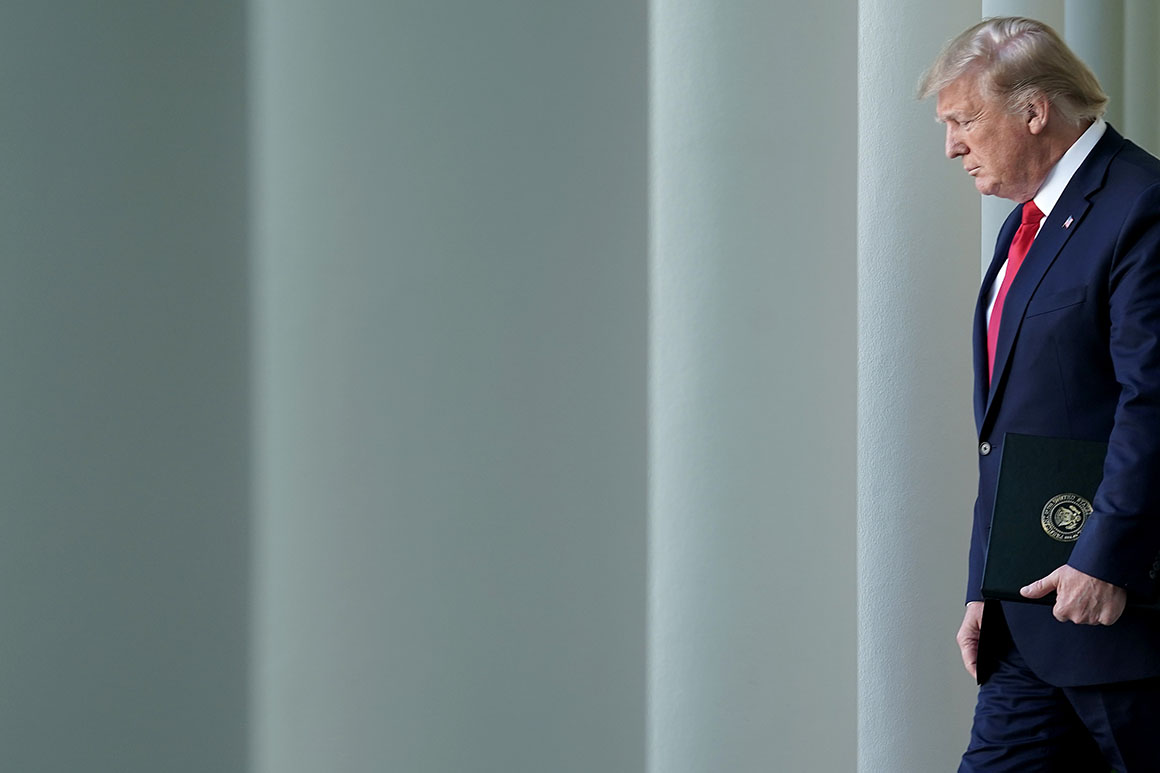 It took less than a day after major Saudi oil facilities came under attack this weekend for Secretary of State Mike Pompeo to blame Iran directly.

The swiftness of the judgment raised eyebrows in Washington and around the world, triggering immediate comparisons to the run-up to the Iraq War in 2002 and 2003, when the George W. Bush administration evoked the specter of a “mushroom cloud” to make the case for intervention in the Middle East.

It took until Wednesday morning for Saudi Arabia to back up Pompeo’s claim, with the Saudi defense ministry explicitly pointing to Iran and ruling out Yemen as the source of the drones and cruise missiles. In a dramatic news conference in Riyadh, Saudi officials displayed wrecked pieces of several recovered weapons and said the attack had come from the north, though they hadn’t pinpointed the launch site.

In the interim, skepticism of the U.S.’ credibility started to pour in. “This administration that lies about, whether maps or crowd sizes, cannot be trusted to give us the full information we need to be able to make a decision whether we should be going to war or not with Iran,” Rep. Ilhan Omar (D-Minn.) told CNN.

Colin Kahl, a former top national security aide in the Obama White House, tweeted: “Establishing whether Iran launched the attack & what an appropriate response would be are tough issues that would benefit from US international credibility—credibility Trump has squandered as a result of his America First approach & constant lying.”

The Trump administration on Sunday released satellite photos it said proved the attack emanated from the north — not from Yemen’s Houthi rebels to the south, who had claimed responsibility. GOP senators emerged from a briefing Tuesday sounding pretty confident about Iran’s culpability. CNN and The Wall Street Journal reported on additional intelligence pointing to Iran. And an array of experts told POLITICO that it seems likely Iran was behind in the attacks in some fashion.

So why the credibility gap?

Part of the problem, Iran experts and former national security officials said, is the way Pompeo and President Donald Trump rushed to finger Iran before laying out a clear case or bringing allies on board.

Pompeo’s comments “preceded evidence,” said Richard Haass, president of the Council on Foreign Relations, who served in several GOP administrations. “It’s better to get the evidence out and then the judgments.”

Haass added: “And second of all, he is one of those most associated in this administration with an anti-Iranian policy. So it just looked like he was leaning forward too much.”

Then there’s the president himself: Trump’s unusually high tally of public falsehoods has weakened trust in his pronouncements. So far, he’s made 12,019 false or misleading statements since taking office, per The Washington Post (5,276 false as of May, per the Toronto Star) on subjects as minor as “Morning Joe” ratings and as major as the existence of his signature border wall.

“At a minimum, if someone is constantly making errors and needs to be fact-checked, it breeds cynicism about the truthfulness of what they say,” said Angie Drobnic Holan, editor of the Pulitzer-winning PolitiFact, which has evaluated 713 Trump statements and deemed more than two-thirds “mostly false” or worse. “I think that would apply to anyone in any context.”

And finally, there’s the long Iraq War hangover, with “weapons of mass destruction” still ringing in the ears of a war-weary public.

And apparently the president, too: Trump told reporters Wednesday afternoon that while a military strike wasn’t off the table, “how did going into Iraq work out?”

Iran, whose M.O. this year has been gradual escalation under the veneer of plausible deniability, can harness such an environment to its benefit. The drone strikes on Saudi Arabia’s Abqaiq processing facility and Khurais oil field hammered 5.7 million daily barrels of crude production, roughly 5 percent of the worldwide supply, and triggered the largest daily jump in oil prices in a decade.

Typically, former national security officials said, the U.S. evaluates several types of intelligence to make a determination of responsibility after incidents like this, drawing conclusions at various confidence levels. Then it tries to marshal support from foreign allies — and members of Congress — behind the scenes by sharing as much intelligence as it deems appropriate.

In this case, Pompeo’s tweets preceded all that. Even Trump wasn’t as definitive in the subsequent days, saying “certainly it would look” like Iran did it.

The U.K., France and Japan all said they were still reviewing intelligence, or that they hadn’t yet seen evidence of Iranian culpability. The U.S. has so far failed to recruit many allies if it does want to retaliate militarily.

In part, the American case for blaming Iran depends on what the Trump administration wants to achieve. Trump on Wednesday announced significant (and vague) sanctions forthcoming — but he’s leaning against military action. Experts said it seemed likely the administration simply wanted to keep building the case for its maximum-pressure campaign against Iran.

“If you’re just trying to blame Iran … there’s no leverage that has to be applied” with allies, said Jon Wolfsthal, senior adviser at Global Zero and a former Obama NSC senior director. “There’s no diplomacy at work there. If, however, we actually want to have coordinated effective response, then the bar climbs.”

But in this case, experts said, the evidence does indicate that Iran bears at least some responsibility for the explosions in Saudi Arabia, its regional arch-enemy.

Fabian Hinz, a researcher at the James Martin Center for Nonproliferation Studies, said the attack was “very, very precise to a stunning degree,” indicating a level of sophistication far beyond previous Houthi attacks.

“People are very critical of Trump, for very understandable reasons, and then might be too critical of many of the intelligence” reports, he added.

Sen. Ron Johnson (R-Wis.) told reporters Tuesday that while Vice President Mike Pence’s briefing to the Senate GOP was short, he found it “pretty convincing Iran is responsible.” He added that once that’s “absolutely” confirmed, the United States should come up with a response with its allies.

“The Trump administration has to put American interests over the financial oil interests of the Saudi royal family and must come to Congress with more credible and persuasive evidence that we’ve seen so far if they’re going to blame the Iranians,” said Sen. Richard Blumenthal (D-Conn.) in an interview. “They owe us a better, fuller set of evidence and facts.”

The nature of classified intelligence often gives government officials an uphill battle in convincing the public, others noted.

“From my experience, there is always skepticism in this type of scenario, when you’re announcing a conclusion based on intelligence you can’t share,” said Michael Singh, managing director at the Washington Institute, who worked in the George W. Bush White House. “And it’s something that really bedevils policymakers.”

The specter of the Iraq War lead-up, when Secretary of State Colin Powell famously told the United Nations about Iraqi weapons that did not in fact exist, still looms large. Standing on the floor of the Security Council chamber, he brandished a model vial of anthrax as a sign of the dangers and told the world, “Every statement I make today is backed up by sources, solid sources. These are not assertions. What we’re giving you are facts and conclusions based on solid intelligence.”

Years later, Powell would acknowledge that some of the intelligence was inaccurate and that he regretted the speech.

“You don’t want a repeat of the Iraq War, but at the same time you don’t want an Iraq War hangover to impede you in this analysis,” warned Behnam Ben Taleblu, a senior fellow at the Foundation for Defense of Democracies.

But some of Trump’s credibility gap stems from issues that are uniquely of his administration’s own making.

“I don’t think they’re credible in the way they’ve said it, particularly Secretary of State Pompeo,” said retired Col. Larry Wilkerson, who was chief of staff to Powell and thought Tuesday that the Iran-backed Houthis were still the likeliest culprits. “I just think they are reinforcing the, if you will, 2002/2003 image of, this is WMD in Iraq.”

Daniel Lippman and Marianne LeVine contributed to this report.

The End of Economic Growth? Unintended Consequences of a Declining Population -- by Charles I. Jones

Political Activism and the Provision of Dynamic Incentives -- by Antoine Camous, Russell Cooper