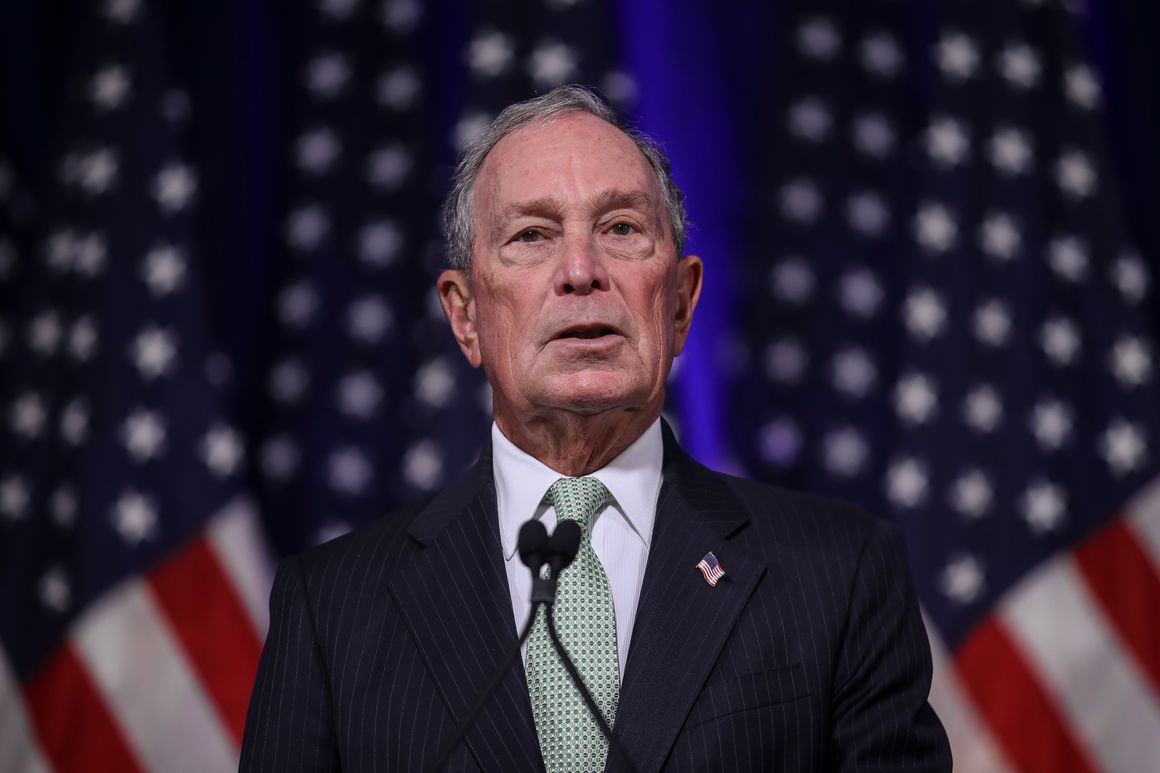 It stands to reason that Mike Bloomberg, who amassed a $54 billion fortune by collecting petabyte upon petabyte of sortable data, would champion the creation of a high-tech surveillance state that would collect personal data as aggressively and as expansively as he and his company do financial data.

Throughout his 12 years as mayor of New York, from 2002 to 2013, Bloomberg rarely stumbled over a civil liberty he wasn’t willing to trample. Most notably, he instituted his “stop-and-frisk” policing policy, which unjustly singled out minorities for scrutiny. He has since apologized for stop-and-frisk but not for a whole array of high-tech surveillance technologies he urged New York to adopt during his three terms. As Bloomberg’s self-funded run for the presidency accelerates—he now holds the largest lead of any Democrat in a poll of projected general election matchups against Trump in Michigan—it’s not inconceivable that he will find himself in a position to make national the technologies and policies he urged locally.

Bloomberg has issued cascading demands for greater governmental scrutiny of our private lives. Facial recognition, DNA testing, advanced video and audio surveillance, drones and, of course, databases—Bloomberg loves them all. Mike, you see, wants to watch the data. All of it. All the time. Everywhere.

Civil libertarians gave Bloomberg an earful for his surveillance build-up in New York City, but he brushed off criticisms with his billionaire-knows-best curtness. In 2006, when he proposed a national work ID card system based on DNA and fingerprint information, he insisted: “This is not a civil-liberties issue. You don’t have to get a Social Security card; you don’t have to work. But if you want to work for a company, you have to have a Social Security card.” In 2007, he called for and eventually got additional surveillance cameras to join the thousands already peeping on New York City streets. In 2008, he advocated the collection of DNA from all New York City suspects. In 2013, Bloomberg requested the purchase of surveillance drones by the NYPD to monitor civilians, calling them inevitable. “What’s the difference whether the drone is up in the air or on the building?” Bloomberg said in an interview. In 2017, Bloomberg’s wish came true as the NYPD purchased its first surveillance drones. By 2018, city police had a fleet of 14 of the devices under its command.

Under Mayor Bloomberg, New York added facial recognition to its law-enforcement quiver and deployed the portable “Sky Watch” towers also used on the U.S.-Mexico border to monitor potential crime areas. Under his administration, undercover NYPD officers spied on Occupy protesters, GOP convention protesters and even Critical Mass bike rallies. Bloomberg oversaw the NYPD’s Lower Manhattan Security Initiative, a network of cameras and license-plate readers that covers much of the city. Once, at a mayoral news conference, he crowed about the proliferation of city cameras. “You’re never going to know where all of our cameras are,” he said.

The mass-surveillance net Mayor Bloomberg cast over New York, which remains largely intact six years after he left office, has left the city’s citizens less free. But has it made them safer? The often-cited impetus for building Bloomberg’s surveillance city-state was 9/11, but his initiative would have done nothing to stop those terrorists. Bloomberg used the Boston Marathon bombings to defend his policies, too, even though the abundance of cameras in that city did nothing to stop that attack. Nor did New York’s cameras stop attempted bombings in Times Square and the New York subway. This, of course, doesn’t prove that cameras will never prevent a bombing, but it signifies that a government with eyes everywhere often fail to see the threats they’re supposed to detect. In the United Kingdom, where surveillance cameras are ubiquitous, the technology has had little effect on crime deterrence.

The ACLU offers multiple examples of law enforcement agencies using centralized surveillance technology to commit crimes of their own. In Washington, D.C., police were charged with using computer databases to blackmail patrons of a gay bar. Cops have been known to use the technology to stalk women, discriminate against minorities, and engage in privacy-violating voyeurism to spy on citizens without any formal oversight. Then there are the negative social effects. Being watched encourages people to self-censor and limit their communications to a trusted circle. Subjects of mass surveillance keep looking over their shoulders at the watchers, making some feel less unsafe rather than safer.

These common arguments against government surveillance have never moved Bloomberg. Ever the data-miner, he instructed his foundation to drop $5 million on 60 surveillance cameras, 25 mobile license-plate readers, and gunshot-detection devices two years ago in the city of Baltimore, home to his alma mater. He has also embraced surveillance as a government-revenue enhancer. Under his direction, New York partnered with Microsoft to develop the Domain Awareness System, which weaves data from license-plate readers, surveillance cameras, radiation sensors and crime databases into a single “predictive policing” technology: The deal will pay the city 30 percent of gross revenue on Microsoft’s future sales of the technology. “We’re not your mom and pop police department anymore,” Bloomberg told reporters when unveiling the Domain Awareness System in 2013. “We are in the next century. We are leading the pack.”

The darkest stain to blot Mayor Bloomberg’s civil liberties reputation came in 2011, when The Associated Press revealed the NYPD’s clandestine surveillance of Muslim communities, student groups and mosques. Starting in 2002 and continuing through the aughts, the NYPD snooped on Muslims all over the Northeast, including in Newark and at Ivy League schools. Police used photo and video surveillance, recruited informants to report back from mosques, mapped Muslim communities, tracked individuals who changed their names, and compiled intelligence databases. An undercover officer even went whitewater rafting with Muslim students. Bloomberg defended the spying, which police reportedly concealed even from him, saying, “We have to keep this country safe.”

But the NYPD spying failed to produce any leads, The Associated Press reported.

Bloomberg developed his passion for surveillance, it seems, on the job at Bloomberg L.P., where employees enjoy little privacy. Like other companies, Bloomberg treats workers as if they were parolees, monitoring the office with surveillance cameras. Such snooping is legal and common in American business, but it’s still creepy. CNBC reported in 2013 that any employee can look into the company’s computer system and see when you badged into the office. Fellow workers can also query the system to see how long your computer terminal has been idle. One disgruntled former Bloomberg employee told In These Times he got a monthly breakdown of the time he spent on the phone, how many instant messages he took, and how many phone calls he missed. Confidential agreements are standard for new Bloomberg employees. He recently refused to release female employees from such agreements so they could speak freely about the hostile work environment they claim he fostered in the past for some of them. In a 2015 Politico Magazine feature, Luke O’Brien reported that some Bloomberg employees have been asked by the company to give it access to their home computer and their work computer should they take another job.

Facial recognition software is desperately flawed, especially when scrutinizing black faces. Mandatory national work IDs based on biometric data sound like an idea China’s authoritarian rulers would tout. As for the mass collection of DNA, wasn’t that a plot twist on a recent Black Mirror episode? Routine drone surveillance would mostly produce intrusions into our privacy. His vision of predictive policing would encourage mass surveillance of people based solely on where they live. Automated license-plate reader systems corral too much sensitive information, creating databases on the movements of noncriminals that some police share with other jurisdictions. The databases provide a geotagged roadmap to the way we live our lives: whom we visit, where we worship, how we practice our politics, the locations of our sexual adventures and the state of our health. “Get used to it,” Bloomberg said to critics of automated surveillance.

Worse than Bloomberg’s high-tech solutions to crime and terrorism are his justifications for submitting to them. “The people who are worried about privacy have a legitimate worry,” he said in 2013. “But we live in a complex world where you’re going to have to have a level of security greater than you did back in the olden days, if you will. And our laws and our interpretation of the Constitution, I think, have to change.” But this approach “borders on constitutional defamation,” as law professor Jonathan Turley put it that year. The Constitution is the thing we’re fighting to protect. In Bloomberg’s eyes, the Constitution is the thing that’s endangering us, Turley noted.

As Conor Friedersdorf has written in the Atlantic, Mike Bloomberg presents as a sensible centrist. Even his presidential campaign slogan, “Mike will get it done,” speaks to practicality and common sense. But don’t be fooled. Throughout his mayoralty and beyond, Bloomberg has proved himself to be a surveillance-state extremist, says Friedersdorf, with an appetite for meddling in the lives of citizens. That he’s willing to spend $1 billion from his own purse in pursuit of presidential power indicates a hunger that can’t be sated.

Yes, Bloomberg employees spied on their company’s customers. See this 2013 Jeff Bercovici piece in Forbes. Please don’t ask me about NYPD’s X-ray vans. It’s too depressing. Send email to [email protected]. My email alerts spy on my Twitter feed. My RSS feed was packed into a bottle and sent to the gulag.